It precipitates sideways in the Midwest. This does not happen in the mountains.  Well, at least not often or even frequently.  Sideways precipitation is not enjoyable.  It is especially unpleasant at 5:30 a.m. when The Queen wants her morning walk (she does not care what the weather is doing).  Lately, the weather has been rainy and forty degrees.  My least favorite weather to live in, much less walk in.

To complicate matters, I hear constantly what a “bad”, “cold”, and “long” winter that is coming.  It is on the radio, the internet, and in conversations nearly everyday.  I really wish a wooly worm would appear and prove all these people wrong.  Since that is not going to happen, I have decided to adopt the Scarlet O’Hara position.  I won’t think about it today, I will think about it tomorrow.

Luckily, between the rainy days the Midwestern fall is still pretty and I intend to enjoy it until the snow starts to fly.

Here are a few snaps of the pretty before the snow . . . enjoy!

This lovely little lane above is in northern Allen County just off of Puff Road.

Ouabache State Park located in Bluffton, Indiana is a beautiful park complete with lake, trails, and gorgeous picnic areas.  It is a great place for a walk, fishing, boating, or a climb on the fire tower.  The leaves were very pretty.

Indiana has a system of fire tower that were historically used to protect property from fires. This is one of three fire towers in northern Indiana constructed for that purpose.  I was really excited about climbing the tower for some pictures of the fall leaves.  Unfortunately, the tower was closed because of a hornet problem.  Maybe next time.

In the words of Sophia Petrillo (I love The Golden Girls), “picture it,” North Manchester, late September 2011, a light rain was falling as 75 hungry farmers, business people, neighbors, family, and friends happily gathered on the J. L. Hawkins Family Farm to dine between heaven and earth. Well, it was close to being “between heaven and earth”.  Because of the rain we  dined between earth and the top of a clear plastic shed. 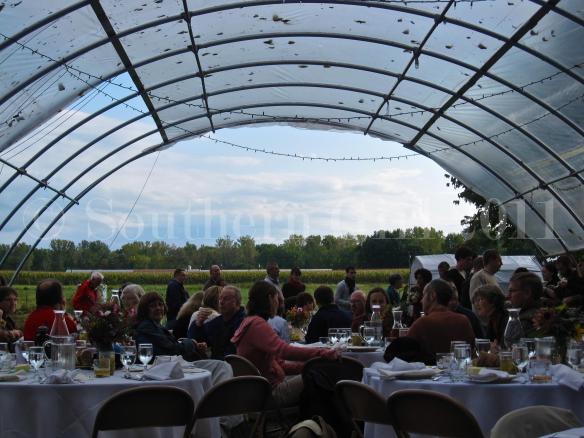 The guests were unaffected by the weather.  We could see heaven and the food we dined on was definitely heavenly.  The Hawkins Family farm hosts an annual harvest dinner -between heaven and earth – on the farm.  Actually, right in their yard.  The dinner is $75.00 a plate and all the proceeds go to support Hope CSA “a not-for-profit teaching ministry that offers a course of experiential learning and academic study to assist pastors to become healthier and more effective leaders.”  Jeff Hawkins, the farmer, is a pastor and runs Hope CSA.

All the produce and meat served at the dinner was locally grown.  The coffee and beer was also local, well as local as coffee gets.  The FW based local Red Brick Roasters provided the coffee pairing and FW brewery Mad Anthony’s provided the five beers paired with the four courses served.  Oh, and the pretty flowers on the tables were grown there on the farm – no detail ignored!  Chef Jennifer Disler, who has a passion for local food, prepared the menu and did the cooking in a small building behind the farmhouse using largely a brick oven.  The theme for her menu was preservation . . . thinking canning, smoking, and pickling.

The experience started with brick oven French sourdough crostini (the flour used for the bread was milled in Northern Indiana and the bread was made by the farmer’s son) with fresh goat cheese with assorted tomato jams and beet chutney toppers, open faced duck pastrami sandwiches with Sunny Meadow swiss and Oktoberfest mustard.  The appetizer was paired with Mad Anthony Gabby Blonde Lager, Mad Anthony Oktoberfest, and fresh mint flavored water.  The duck pastrami was amazing, I had never had anything like it (and the fact it was slathered in cheese did not hurt).  The beet toppers were both pickled and raw – very fresh and sweet when paired with the goat cheese.  It was a great start.

Throughout the dinner, which was intended to be leisurely and enjoyed, several speakers addressed the group.  The first was Jeff Hawkins, the farmer, and his family.  The Hawkins Farm is truly a family affair.  Both of the Hawkins children and their spouses were heavily involved in farm operations and/or the dinner.  Mr. Hawkins gave us a tour of the farm (from the shed).  The farm is designed to sustain itself as much as possible – all the animals selected are done so with the purpose of supporting another aspect of the farm.  The farm features pigs, chickens, domestic turkey (big white Thanksgiving turkeys), smaller turkeys, and Jersey steers and cows.  There are also some guinea hens, beautiful birds, that decided to cut-up during dinner.  Apparently it took them 2 courses to realize we were there?  This also got the pigs riled up offering us a nice background of farm noises – it was delightful and fun.

The salad course and entrees were served buffet style alongside one another.  The salad was a collection of fresh greens with apples, French breakfast radishes, flat leaf parsley and a maple/sage vinaigrette.   French brick oven pain au levain was paired with the salad along with Mad Anthony’s Woody Pale Ale, fresh mint flavored water, and iced black and lemon tea.

Amazing.  I had to try it all – everything looked too good to pass up. 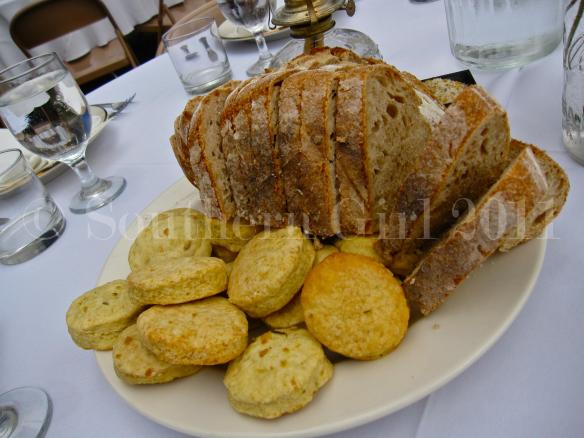 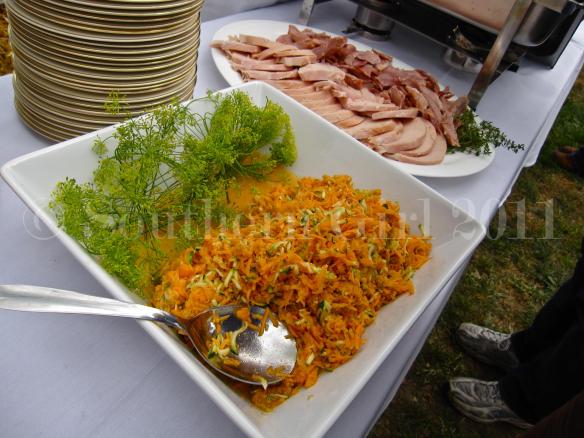 All of the meats served were cooked to perfection and were moist and flavorful.  The smoked duck greens were unique and awesome – why wouldn’t you put duck in your leafy greens?  I am Southern I love greens, it is a rule.  My favorites (although all were good) were the ham, turkey, greens, and wax beans.  This was truly an experience that you cannot get anywhere else.  It was an adventure of food, culture, and conversation.

The speakers during dinner continued to provide short comments.  Around the end of the entree service we heard from Cliff Kindy and Mark Sloss.  Mr. Kindy is the owner and farmer of Joyfield Farm, which provided many of the vegetables that we ate on this night.  Mr. Kindy and his wife have a special farm.  Joyfield Farm is organic, simple, and sustainable.  They are involved in a ministry that involved a trip to the Middle East.  Mr. Kindy returned and decided that he was going to do his part so that “we do not have fight over oil” and his part was to “give up the tiller”.  Mr. and Mrs. Kindy plant their vegetables the old fashioned way – with a hoe.  They also have elected to not use public water for irrigation but rather enrich their soil with humus and rotate their crops in a such as way as to encourage water retention.  Now in dry years they do fine.  It is hard, I imagine, but it must be rewarding.  I was very impressed and I deeply admire this couple and what they are doing for themselves and their community.  They are special and the rest of us can learn a lot from folks like these folks.

Mr. Sloss followed Mr. Kindy and he is a pastor that has participated in the Hope CSA program and now serves on the Hope CSA board of directors.  Mr. Sloss gave a lovely talk about the benefits of Hope CSA programming to pastors.  Participants have the opportunity to become closer to creation and spend a day away from the busyness of life.  It sounded like it would be a program useful to many groups of people in addition to the clergy.  Support your local church!

Then came dessert.  Each table received a tray of deliciousness that included honey brownies, zucchini sandwich cookies (think whoopie pies), apple cider caramels, and maple nut brittle all paired with Mad Anthony’s Raspberry Wheat Ale and Red Brick Roaster’s Cafe Volo coffee.  I never dreamed that zucchini would be a dessert, but it was outstanding.  As for the caramels, well, at least one of those ended up in my pocketbook for later.  They were excellent. 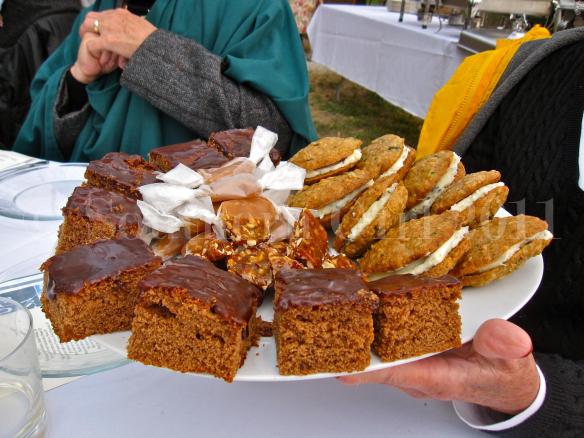 The dinner was closed out with the introductions of the chef and cooks.  It was a marvelous evening.  The food was fantastic and the weather cleared just as dinner started.  An added bonus was that our table was filled with fun, interesting, and friendly folks from just down the road.  To my right was a farmer and his wife who live next door on a family farm.  They farm the land and in their spare time build Habitat for Humanity homes.  To my left were faculty members and the president of a local college.  Who would imagine that such a diverse group could be collected on a farm in the middle of Route 300 in North Manchester, Indiana?  It happens.  The most interesting people are often in your backyard, so to speak, but you have to get out there and meet them and more importantly talk to them and you will probably learn a lot.

I really enjoyed this event.  I am so happy and blessed that a kind colleague of mine thought of me when he and his wife could not attend this event, prompting him to pass along his tickets to me.  His generosity was put to good use.  Next year I will be getting a reservation early.  You should too.

It is pretty here in Northeast Indiana.